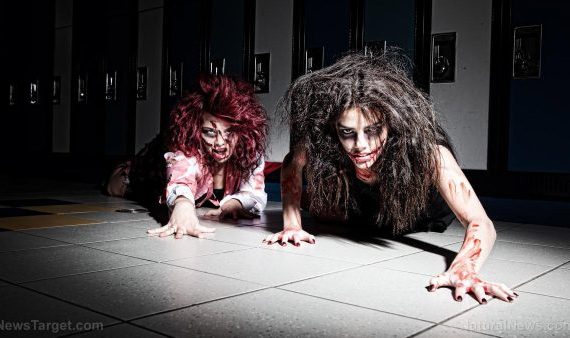 One of the least expensive but deadliest street drugs available today is known as KD, Katie or Zombie. This drug may contain different ingredients, but the common denominator is always bug spray. Users take marijuana, banana leaves, tobacco or spice and lace it with a bug spray, most often Raid. This concoction is then smoked, giving users a 45-minute high that leaves them virtually unconscious. Some people choose to make their own drugs, while others buy it for around $20 a bag. Irrespective of where they get it, however, it is incredibly addictive and absolutely lethal.

In recent weeks, Indianapolis medics have had to deal with around a dozen KD overdoses each day, with some people overdosing repeatedly on the same day. Even for those users who don’t actually overdose on KD its effects are incredibly disturbing and cause what have been described by authorities as “zombie-like” reactions.

Onlookers describe users who become “slow and lethargic,” drool, and lose all motor function or the ability to communicate with others. In short, while in the throes of a high, KD users become totally unaware of and utterly unable to control their actions.

“We find them with their clothes off, eating the grass, pulling dirt out of the ground and trying to put it in their mouth,” Fire Department Captain Chris Major told CBS-affiliate WTTV.

This is perhaps unsurprising considering the ingredients in a typical bug spray like Raid. Inquisitr reported that these sprays generally contain piperonyl butoxide, permethrin, cypermethrin and imiprothrin, among others – all of which are incredibly harmful chemicals. And, when mixed with other ingredients and smoked, this cocktail becomes even more toxic. (Related: Commonly used insecticides impair child brain development even at low exposure levels.)

“You look at what it does to a bug,” firefighter Scott Lebherz told the Indy Star, “and then you got to think what it’s doing to your brain, and your body and everything else.”

Health officials have warned that smoking this drug carries an “extreme risk of fatality,” but users become addicted so quickly that few have heeded the warnings. The fire department reports that the drug is so fast-acting that many overdose victims are found with the drug still in their hands. (Related: Is your insect repellent made from toxic ingredients?)

Bug sprays often have high concentrations of pyrethroids, a pesticide that is meant to knock out or kill bugs like roaches. According to a 2014 study by Texas Tech University Health Sciences Center, “Animal studies of pyrethroid toxicity have shown hyperglycemia and elevated plasma levels of noradrenaline and adrenaline” — meaning the drug will give users one big adrenaline rush before having a rapid comedown. This quick high can make it highly addictive.

Indianapolis authorities are urgently trying to determine the source of the KD being sold on the city’s streets.

Sources for this article include: